Skip to content
Home » Events » Upcoming Events » May 16 | The Aesthetics of Toxicity, Vieques: Presentation and discussion on Sound, Media, and Violence in the Caribbean 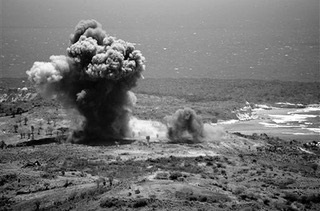 The artists Allora and Calzadilla have spent over a decade in creative response to the destruction and attempted reconstruction of the island of Vieques, Puerto Rico, which was subject to bombing and weapons testing by the US Navy between 1941 and 2003. Their work includes a series of video/soundscape engagements with memory, violence and marginalization. But as they suggest, the videos are also characterized by ambivalence and oscillation, “suspended somewhere between disaster and progress, oblivion and memory, grief and hope.” This presentation explores the media and aesthetics of toxicity, following Allora and Calzadilla to seek the tones and registers through which we can comprehend Vieques’ past and present.

Alejandra Bronfman is Associate Professor and Director of Graduate Studies at the Department of Latin American, Caribbean and US Latino Studies at the University of Albany-SUNY. Her third book, Isles of Noise: Sonic Media in the Caribbean (University of North Carolina Press, 2016), records unwritten histories of broadcasting and sonic technologies in early twentieth century Cuba, Jamaica and Haiti. Her research interests include histories of sound, environment and toxicity, and the material nature of communications networks in the Caribbean.