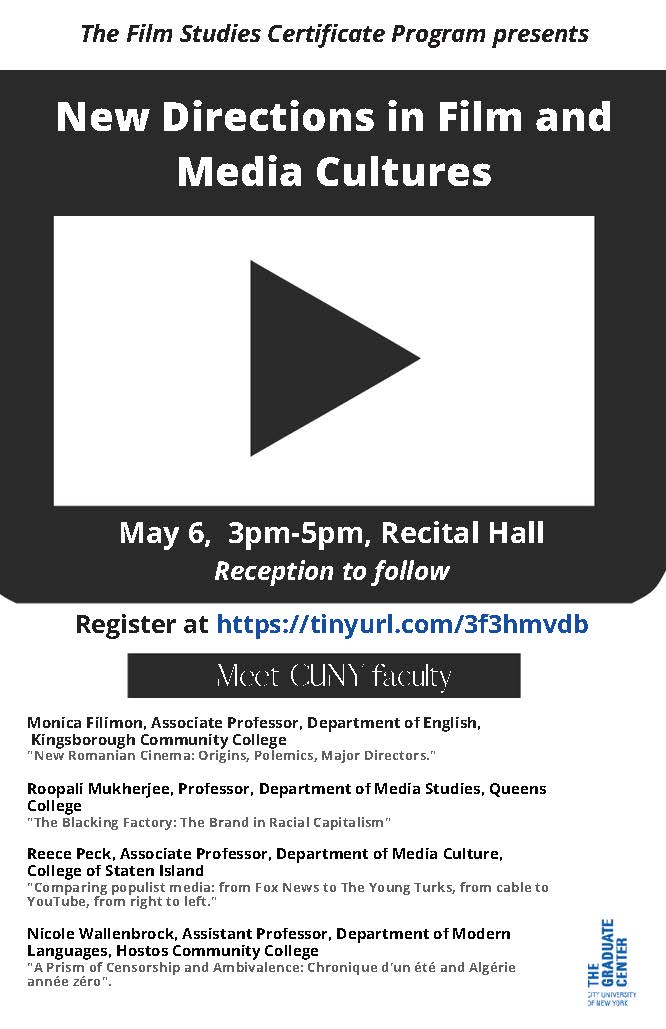 Monica Filimon’s research focuses on Spanish, French, German, and Romanian cinema. Her first book, Cristi Puiu: Ineffable Experiences of the Profane World, was published in 2017; she is currently working on a second project titled Corneliu Porumboiu: Notes on the Absurd. She is Associate Professor of English at Kingsborough Community College, CUNY.

“The Blacking Factory: The Brand in Racial Capitalism”

Roopali Mukherjee is a critical race scholar of media and currently serves as Professor of Media Studies at the Queens College, CUNY. She is the author of The Blacking Factory: The Brand in Racial Capitalism (UMinnesota, in press) and The Racial Order of Things: Cultural Imaginaries of the Post-Soul Era (UMinnesota 2006). She has co-edited two scholarly anthologies, Racism Postrace (Duke UP 2019) and Commodity Activism: Cultural Resistance in Neoliberal Times (NYU 2012).

“Comparing populist media: from Fox News to The Young Turks, from cable to YouTube, from right to left.”

Reece Peck is an Associate Professor at the Department of Media Culture at the College of Staten Island, CUNY. He is the author of Fox Populism: Branding Conservatism as Working Class (Cambridge, 2019). His research engages the media dimension of the political right and specifically examines how conservative news outlets use populist rhetorical styles to reconfigure the meaning of social class in the United States.

“A Prism of Censorship and Ambivalence: Chronique d’un été and Algérie année zéro”.

Nicole Beth Wallenbrock is Assistant Professor of French and Francophone Studies at Hostos Community College of the City University of New York, USA. She is the author of The Franco-Algerian War through a Twenty-First Century Lens: Film and History (Bloomsbury, 2020). In this book, she probes cinematic discourse to shed new light on topics including: the media revelation of torture and atomic bomb tests; immigration’s role in the evolution of the war’s meaning; and the complex relationship of the intertwined film cultures