Skip to content
Home » Opportunities » Call for Content » Due by 11/9 | CfP – Striking back at Empire: Politicizing Media Genres

University of Pittsburgh, February 18-19, 2021
Due to the COVID-19 pandemic, the conference will be held entirely online.
Hosted by the Film and Media Studies Graduate Student Organization (FMSGSO)
Call for Papers | Deadline: Monday November 9th, 2020 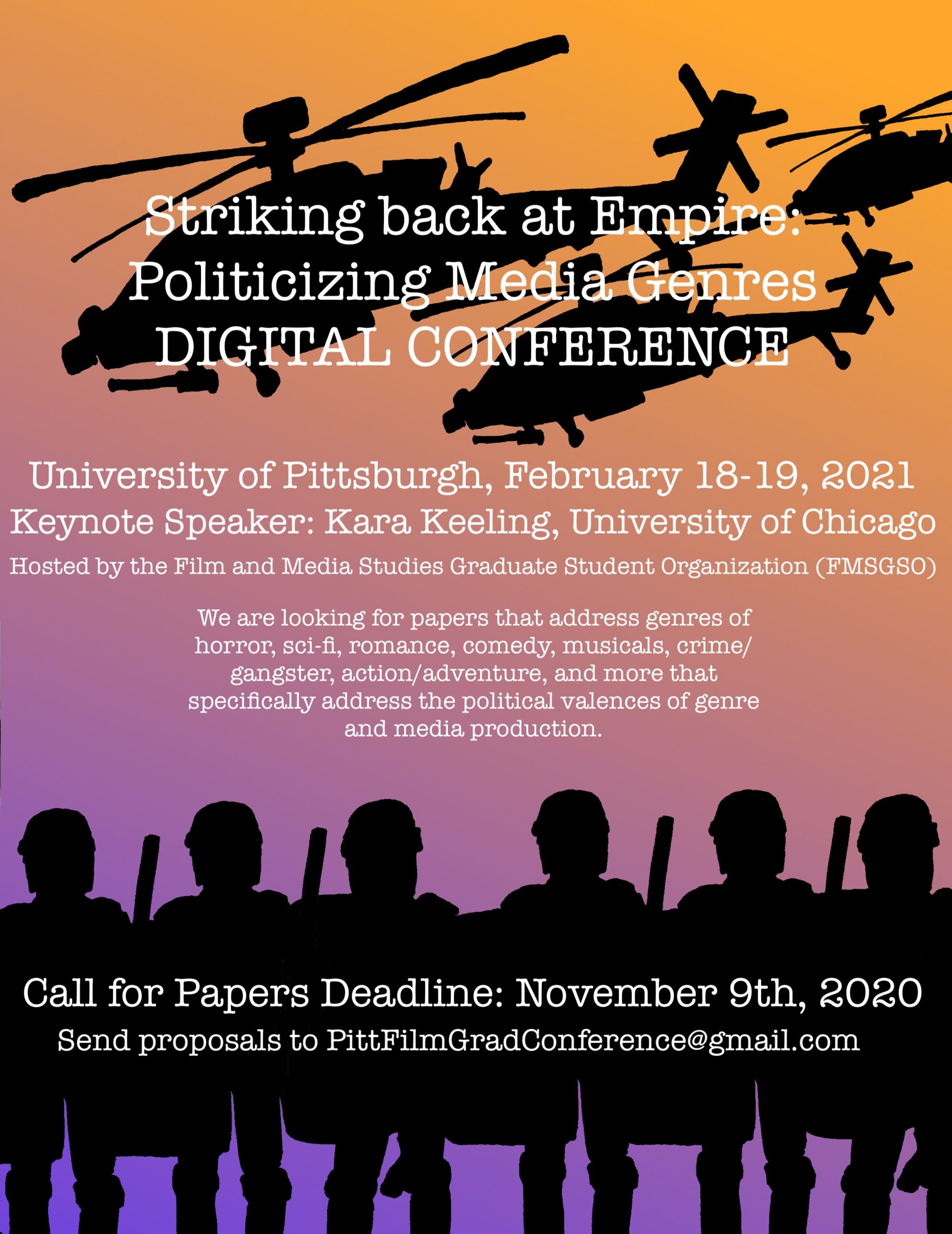 Politics have always been an integral aspect of media genres. But, given the contemporary world situation, they have perhaps become even more important. Today’s film, television, and videogames exist in a strong interconnection between their 20 th -century legacy and contemporary social movements, from both radical anti-colonial, feminist, or environmental perspectives to the alt-right rebellion against the modern world.

The classical Hollywood industry in the first half of the 20 th century was creating, promoting, and adjusting genres as its tools to achieve greater profits and the strategy of the achievement was subjected to different sets of political frameworks, such as concerns about children and presumed migrants’ delinquency or socio-political implications of the Prohibition laws.

But political movements were not limited to a silent background that causes changes in the film industry. The influence went in both directions. In 1983, Ronald Reagan weaponized the popular sci-fi Star Wars franchise for the purposes of Cold War propaganda and labeled the Soviet Union an “evil empire.” Media genres’ content and form inspire modern politics and provide language to different social groups. Today, this mutual dependence is recognized by media producers, developers, screenwriters, directors, and—last, but not least—by scholars. Today genre media and scholarship are weaponized in both ways. Politicians’ neoimperial and neonationalist rhetorics may still persist, but such genre films like Jordan Peele’s Get Out , Matt Bettinelli-Olpin’s and Tyler Gillett’s Ready or Not , or Coralie Fargeat’s Revenge as well as videogames like Hellblade: Senua’s Sacrifice and Disco Ellysium challenge the oppressive discourses from below.

We are looking for papers that address genres of horror, sci-fi, romance, comedy, musicals,
crime/gangster, action/adventure, and more that specifically address the political valences of
genre and media production.

Given the context of this call’s and conference’s timing, we are also open to presentations that grapple with the specific aspects of the [sci-fi horror] genre in which we currently live: issues of isolation, quarantine, authoritarian approaches to social distancing (and their larger implications), anti-Asian racism in particular, cultural fears around infection and infestation, among other prescient topics.

Possible topics for the conference may include, but are not limited to: